The day you make the leap from individual contributor to leader is the day you welcome continuous conflict into your life. Sure, there are conflicts at entry and mid-level positions, but it’s a fact that leadership and conflict go hand-in-hand, especially for those of us at the C-level charged with making hard decisions for our organizations.

Despite the regularity of conflict in a leader’s daily existence, it seems I see more and more conflict-averse executive teams who create unnecessary tension in their organizations because of an unwillingness to resolve issues by handling them as they arise. They fear bringing it up will increase the intensity level of the conflict or that it’s just easier to ignore than deal with – but the exact opposite is true. Avoiding conflict creates additional tension because it allows a situation to fester – we end up speculating on how others are feeling, projecting our own fears on the situation, and stressing in the interim about the eventual outcome.

Leaning into conflict is difficult 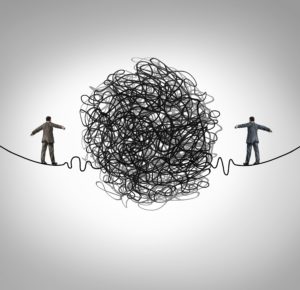 Being a generally affable person, I can’t say I enjoy conflict but I’ve found that leaning into it is a much better tactic than ignoring it, or letting it percolate and waiting for it to dissolve on its own. I do not believe that most people cause harm intentionally by manifesting unwarranted conflict, and that sometimes conflict arises because of a perceived or real lack of respect, communication, or appreciation.

It’s human nature to avoid conflict because of the accompanying negative emotions and anxiety. We are afraid of losing a customer’s business, assume our team won’t handle it well, or don’t want to hurt our loved one’s feelings. Leaning into conflict is handled in the same manner regardless of the type of relationship conflict arises in be it provider/customer, employer/employee, or significant other/significant other. It requires an all-encompassing perspective change on how we manage our relationships.

My charge in this article is that we as leaders, colleagues, husbands, wives, friends, and parents embrace conflict as a part of our lives, become more comfortable facing it, and use it to advance the goals of the involved parties.

Is it worth it?

Before we even begin addressing conflict, we must evaluate if the possible consequences are worth the risk. Some of the most successful people I know understand and take great care in picking their battles. If solving a conflict-situation isn’t absolutely critical to something that really matters to us, let it go. Let’s quantify really matters here – I’m talking wellbeing-inhibiting, success-contingent, ethically-invasive, world-hunger-solving matters. Letting it go is easier said than done for some of us, but simply going through the exercise of recognizing the importance level of the conflict benefits our perspective.

Because if we get honest with ourselves, in the grand scheme of things, most conflict just doesn’t matter.

If after evaluating the necessity of leaning into the conflict, we still decide the potential reward is worth the risk, we can begin formulating a conflict mitigation plan.

It’s important to recognize that we are not inviting harm into a relationship by leaning into a conflict. To the contrary, attempting to ease conflict shows we care about the other person and are interested in solving discontent that exists, ultimately making a relationship stronger. Working through conflict builds trust, and taking a proactive approach leads to a better outcome because discussing varying decisions, opinions, and beliefs often leads to learning and compromise.

A while ago, I inadvertently created a conflict with one of my direct reports. I was insanely busy, working on an important proposal, and the employee brought forward a piece of work on which they spent a significant amount of time and took great pride in. I barely gave the work a second look, and told the employee that we would revisit it much later because it wasn’t a priority. That small interaction cultivated an ever-growing feeling that I did not appreciate my employee, resulting in decreased job satisfaction and anxiety for the employee when we spoke in our regular meetings. I could tell something was wrong and instead of ignoring it, I leaned into it and asked, “Is there was something I did that offended you?” What I learned is that I hadn’t prioritized the relationship, and had I not brought up the situation, it could have cost me a valuable team member.

Throughout my career, the amalgamation of similar instances has led me to my current stance on conflict – to resolve it before it becomes an even bigger problem.

Learning to effectively mitigate conflict makes for healthier, happier, and more successful relationships. When we develop this ability based on the right principles, we enable more candid conversations in the future.

A founder of ArchPoint and Chairman of the Board, Richard Spoon helps clients reach strategic goals by managing through daily business challenges to get to the work that produces results. Click here to contact Richard.