How To Turn A Virtual Team Around

Kay, a 30-year-old digital director at a large media company, cut her teeth in the digital world. She uses her tech savvy ways and insights to earn her bread and butter. Working primarily from her living room, she works solely in virtual teams — and even with all her capacity for connectivity, she still runs into challenges.

The trend of working on one or multiple virtual teams is growing, and almost everyone who has tried it realizes that working with and alongside others in the space between -1 and 1 is tricky — even for the most technologically savvy among us.

Kay’s colleagues have it easier than some. They all speak the same first language and the biggest time difference only spans four time zones. Even still, people have worked face-to-face for millennia. Today’s workforce is breaking new ground when it comes to working with each other from afar. Growing pains were bound to exist.

“We had about 6 months on the job before we all got together,” Kay said. “That face-to-face meeting really helped with the cohesiveness on the team. Three people had previously worked together and already had a rapport — that was hard to break into for the rest of us. A month down the road after our face-to-face time, it was much easier for me to call with a request and get a response.”

According to a landmark study by RW3 CultureWizard on the challenges of working in virtual teams, the inability to read non-verbal cues tops the list — with 94 percent of respondents from 600 virtual team members from around the world weighing in on the difficulties of communicating nonverbally.

The absence of collegiality came in as the second personal challenge, with 85 percent. In the same vein, difficulty establishing rapport and trust is a top concern for 81 percent of the randomly selected employees of multinational corporations.

“It took longer to develop trust,” Kay said. “Not that you start off inherently mistrusting people — it just takes longer to communicate. One thing that’s really helped us, believe it or not, is Facebook. Having that connection to those people and their personal lives made things easier. For example, one co-worker who lives in Oregon loves to travel. When she went to Egypt, I was able to share the experience with her a little and asked her about her photos.”

Nearly two years down the road, Kay says she and her virtual teammates cover for each other and know how to fill in the gaps. “The key is almost near constant communication. We use Facebook chat. I think the conversational parts of our relationships are really important. Connecting on Facebook makes a big difference. Aside from the photos from Egypt, I got to see behind-the-scene photos of a local theater production another one of our team members was starring in.”

While Kay and her team work primarily from their individual homes or offices, Dan, a 46-year-old manager with a global industrial engineering firm, is constantly on the road, as are most of his team members.

For him, the number one problem in working on virtual teams is simple. It’s background noise — literally and figuratively.

“People are in public places — trains, airports, malls and gyms. The noise is terrible,” he said. “Then, when they’re multi-tasking with their phone unmuted, it slows everyone’s communication down.”

Dan has been on enough conference calls to know exactly how each new section of the conversation begins with that all too familiar phrase — “Sorry, was on mute.”

The flipside of the wonders of practicing good conference call etiquette and muting phones while not speaking is revealed in the basic logic of what a two-way conversation is supposed to be about — communication both ways. At best, the dynamics of conference calls prohibit spontaneity of conversation. However, even when callers with the best of intentions find themselves on mute, they are easily distracted and all too often begin working or considering another task — which leads to creating significant barriers in building trust and team dynamics.

Time zones are another practical hindrance for four out of five virtual teams — followed by language issues, holidays, local laws, customs and technology. Aside from practical and logistical barriers, working in virtual teams also requires a different management style. Richard E. Spoon, co-author of Team Renaissance: The Art, Science & Politics of Great Teams, says the manager of a virtual team has to take a slightly different approach.

“In a nutshell, roles must be well-defined, and measures have to be clear,” Spoon said. “The unifying purpose of what we’re trying to get done has to be understood.

Decision rights have to be clear. There’s an element of assumption that works in the interaction of face-to-face teams that has to be spelled out and clarified for virtual teams. Then, the team has to follow those guidelines — or it can all fall apart.”

Some virtual team members believe their managers have to work that much harder to be successful. “I definitely have much clearer expectations from him because we are all virtual,” Kay said. “He carves out an hour each week to speak to each of us individually. In face to face, that probably wouldn’t happen. Knowing you’re going to have that one on one conversation every week with your boss is very helpful.”

Spoon recommends good milestone management, good task management and good project management. “Basically, people like to work together on projects in close proximity so they can play off of each other’s ideas — that’s not impossible, but really difficult in virtual teams. Skype and video conferencing help. There are ways to overcome some of the issues with technology and video, but still, it’s not

the same as working face to face. The bottom line is that virtual teams need very structured, very focused meetings with pre-work that is well defined.” 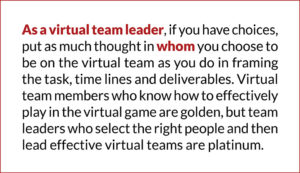 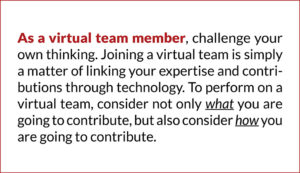 Virtual teams have their quirks, as any team does. Generally, coming prepared, playing big (collaboratively) and staying focused are great virtual team member attributes. Avoid getting too comfortable and casual (I was once on a video conference where a participant thought nothing of flossing her teeth after lunch).

The ability for virtual teams to link and deliver doesn’t happen by chance. We’ve worked with virtual teams that find themselves dealing with the dual issues of managing a virtual team identity of disparate cultures, needs, expectations, and languages; then managing this identity in a work context of different locations, time zones, technologies, etc. Defining the rules, then insisting that virtual team members follow the rules is crucial. Build the radio. Then insist that everyone use the same frequency.